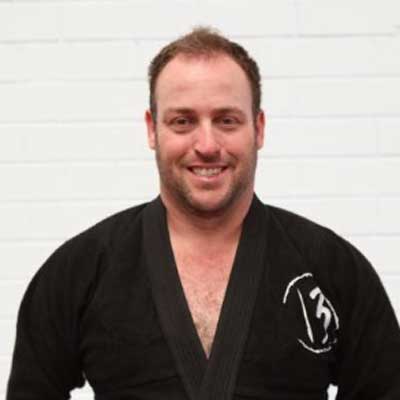 At just nine years old, Andy began his martial arts journey studying Judo under Allan Broadhead at the Illawarra International Judo Club. Competing at state level, Andy also learned several striking arts including kickboxing, Kung Fu and boxing. However, a move to Western Australia in 2001 saw him take up the art of Brazilian Jiu Jitsu (BJJ) under Professor Grayson West. He competed in interstate competitions as well as winning several WA state titles in Gi and NoGi grappling. Andy has trained under and learned from some of the best Jiu Jitsu practitioners in the world, including Marcelo Rezende, Royce Gracie, brothers Rafael and Gui Mendes, André Galvão and Caio Terra.

This hard work culminated in Andy receiving his Black Belt in 2013 from Professors Grayson West and Peter de Been. He received his 2nd degree Black Belt in March 2019 from Professor West. As one of the main instructors at Legion 13 HQ in Perth since 2003, Andy has conducted seminars in Perth, ACT and the Illawarra and is an experienced referee. A move to the ACT in 2018 saw Andy join fellow Legion 13 instructor Adam Saunderson at Stockade Training Centre. Andy works hard to give his students the best instruction possible and to make people ‘better versions of themselves’.

Andy is available for Personal Training