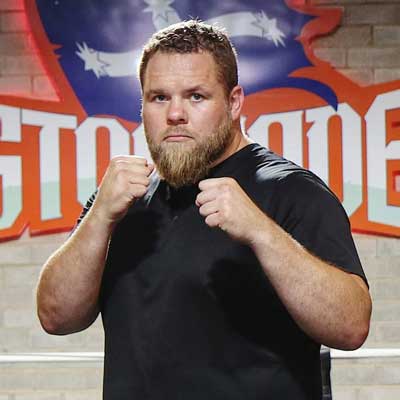 Over his 15 year career, Ben amassed a combined record of 67 professional fights in Kickboxing, Boxing and MMA with 52 wins, 12 losses, 3 draws and an astonishing 44 Knock Outs. Ben has competed all over the world including The Tokyo Dome in Japan and Madison Square Garden in New York City, USA.

He was the Australian Heavyweight Boxing Champion in 2015 and  holds the K1 Kickboxing tournament world Record from 2010, with 3 Knock Outs in one night in a total time of 3mins 30 seconds.  He competed in the PFL million dollar MMA tournament in Atlantic City, NJ in 2019 and Glory Kickboxing in 2013 and twice in 2015.

He has fought the likes of UFC legend Alistair Overeem and current kickboxing world champion Rico Verhoeven.
Ben loves coaching and is very happy to be a part of the team at Stockade,  where he spent a large part of his career. Ben is very well spoken and great at clearly explaining the subtle details of martial arts and he is very much looking forward to passing his knowledge onto the next generation.

Ben is available for Personal Training