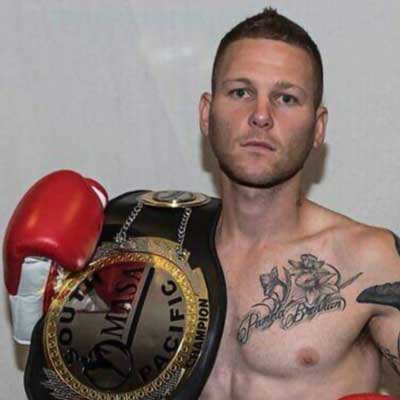 Always a team player and motivated for a challenge, Chris Burridge has spent his life in the arena of competitive sports. Chris played both rugby league and union at state and rep level, and he revels in a positive team environment. It was this trait that attracted him to join the Stockade Training Centre community after he saw the Capital Fight Show at Canberra’s Hellenic Club in 2014. Watching Stockade’s head kickboxing/Muay Thai trainer and World Title holder Josh Tonna compete for his belt got Chris hooked.

He decided to take the next step and try a class at Stockade — and ignited his love of Muay Thai.
“I’ll never forget my first fight,” Chris remembers. “I didn’t really get to look the guy in the eyes as we touched gloves, but I did look him square in the chest – I was intimidated by his height. We were matched according to our weight class. It was an intense bout and I won my first fight, even taking out ‘Fighter of the Night’! That was it — this was what I was meant to do.”

Three years later and Chris has had 10 wins and two losses. He has won the ACT/NSW ISKA State Title, the MASA Australian Title and two MASA South Pacific Titles. He is now on course for his pro debut and to win a South Pacific Title.
Chris is a valued coach at Stockade and he enjoys mentoring other fighters to attain their potential through technique and fitness.

Chris is available for Personal Training